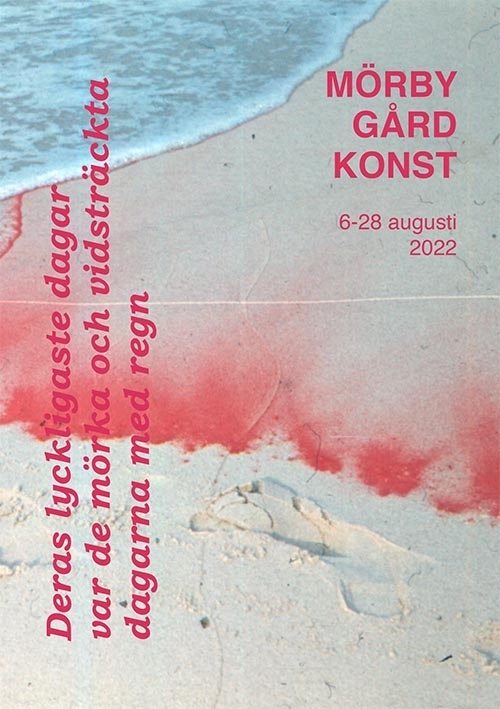 This year's exhibition is curated by the curator and writer Camilla Larsson. She has noted that the artists work in different expressions, but unite in their interest in existentially charged issues and their material sensitivity. With the title Their happiest days were the dark and vast days with rain, she wants to emphasize that in the works shown, the light constantly finds its opposite in the dark and vice versa. The title captures the tension between light and darkness. It describes works of art that move between the painful, the disturbing, the absurd and the beautiful. It is needed in a time like ours that fears the complicated and ambiguous.

Their happiest days were the dark and vast days with rain with support from the Arton Foundation, Haninge Municipality, Stockholm Region, the Polish Institute, Helge Ax: son Johnson's Foundation, All art Now and the Nordic Art Association

Their Happiest Days were the Dark and Vast Days of Rain
Let me propose that we see the artists in the exhibition as spectators. They observe the world, and the artworks can be understood as comments, reactions, or proposals to other worlds. Barbara Kozłowska (1940-2008) was drawing lines on beaches all over the world during the late 1960’s until 2008 when she passed away. The lines in the landscape were filled with natural pigments and with the camera she documented the sand drawings and manipulated the photographs further with pens and crayons. She called her interventions and photographs Borderline.
The photographs show lines that bind east and west together. The lines even have a planetarian reach if your imagination follows them all around the globe. At the same time, they are ephemeral and vanish as the tide rises and falls. And, as we all know, the tide is steered by the gravitation of the moon and the sun.
Lotta Törnroth (b. 1981) turns our gaze towards the moon and binds together the earth with a larger cosmology. Her photographic series Moon Suite started as a way to escape the message about her father´s impending death. The artwork is a reaction of hopelessness, but at the same time it reminds us of people throughout the ages that have looked at the sky with hope and wonders about the eternity of the universe. Simon Blanck (b. 1986) turns our gaze to the Karelian Isthmus, a piece of land that belongs to Russia, but was formerly part of Finland. A place that has been subject to political conflicts through times. In the video The Karelian Isthmus, August we are visiting the graves of the poets Edith Södergran and Anna Achmatova. In the video we are travelling by car on winding roads. The sight is partly blocked by poetic fragments, in Swedish, Finnish, and Russian, that bear witness of the poets occupation with death. Fragments of poems by Achmatova are also quoted on stone plaques that can be found when walking in the forest around the farm of Mörby Gård.

In the video work by Nisrine Boukhari (b. 1980) - An Act Without Words –
we witness two hands in what first looks like changing the pot of a pot plant.
The plant is more and more pruned and finally the roots and stem are cut off.
The soil is emptied out on the table and brushed away. The hands carrying out the act out to the contrasting tones of a classical music box. The harsch act leaves more questions than answers. Boukhari herself fled the war in Syria and keeps coming back to issues related to how experiences of flight, exile, personal crises and chock is manifested bodily and mentally. With a laconic and dark humour, Hillside Projects (Emily Berry Mennerdahl b. 1980 and Jonas Böttern b. 1977) also handle crises and loss. In their artist book Again and Again We Ask These Questions they have gathered all possible questions about the shortcomings of life.
Questions that usually are asked by people in crise, that often remain unanswered. The book might suggest that we have to learn to live with and through these unanswered questions. Hillside Projects also invite us to join them for a guided walk in the forest and at the seashores of the Baltic Sea, where they will direct our listening and looking inwards as well as towards the surrounding nature.

Astrid Svangren (b. 1972), Éva Mag (b. 1979) and Ida Idaida (b. 1990) let us rest at the sites where we are. Through sculpture and installation, they create rooms that are charged materially. Svangren has worked on site and combines organic, found material from the nature at Ornö, with classic painting. Colour, form, objects and different materials are shaped into a three dimensional image that can be stepped into. Mag’s clay figures are in a state where it is hard to tell if they are being built up or if they are crumbling down. For many years she has formed wet clay to bodies and body parts. Recently, she decided to burn and glaze these parts and
The Gut Feeling is equally grotesque as it is seducing. Idaida’s largescale sculpture Autonomy almost float on the meadow at Mörby Gård like a Fata Morgana at the horizon. Made by red-painted wood and chains the sculpture escapes any definition. Equally bombastic and disturbing, it towers up like a pressing question.
It might ask what one is actually seeing. Leif Elggren’s (b. 1950) series of paintings take it starting point in the function of seeing. Or, rather, he uses experiences of a failing macula retina which makes the eyesight poor when contours become blurry. Since 1977 Elggren has taken his interest in and used the combination of the colour black and yellow, found on road signs, adhesive tape, patterns, symbols, and in nature. It is a combination where the two colours are placed side by side and create an apparent contrast that signals danger. Danger of what has been created by humans and in nature, like the black and yellow body of the wasp. When Elggren’s own vision failed he started to experiment with other kinds of combinations between the two colours. The painting series Black: To paint myself back to Yellow show black paint covered with transparent layers of yellow that gradually lets the yellow paint appear visually. The physical sense of seeing is highly regarded in today’s Western world, but in old myths wise human beings often appear as blind. Their sight has been taken away from them in exchange for wisdom. And the saying has let us know that we should not always believe in what we see, nevertheless, the artists in the exhibition insist to observe the world and their gaze extends ours.
The title of the exhibition is borrowed from the author and film maker Marguerite Duras’ book L'été 80 [Summer 80]. Summer 80 is a collection of ten columns written in the summer months of 1980. Before they were published together as a book, they were commissioned and published by the French newspaper Libération. The assignment was simply formulated: write about what interests you and which does not appear in the regular news flow. Duras’ columns contain sharp comments about the famine in Uganda, about Afghanistan, which is about to be erased from the world map, the shipyard workers' strike in Gdansk, Poland, and the oil ships at the port of Antifer. Duras also weaves in thoughts about the weather at the French seaside resort, where she resides during the summer. The weather degenerates into rain, storms and heat. She not only watches the tourists and comments on the world situation, but she also observes a group of children and their summer camp leaders who play on the beach below her house.

In the columns, small things in everyday life are intricately intertwined with larger political events, just as they are connected in life itself. And just as life is, Duras does not give in to what is painful. She rather exposes the pain; stays at the point of pain and affirms feelings as if she were waiting and desiring an approaching apocalypse. In the affirmation of the catastrophe there is a paradoxical ease,
a liberation. Because when everything is over, nothing more terrible can happen. Then everything can just start anew. And the cyclical and repetitive is the author's outermost modus operandi. Duras sees events that took place in 1938 repeated in the summer of 1980. We can see 1980 in 2022. Politics, abuse of power and violence return in a devastating way. But there are also cyclones that return, which, regardless of tearing up the seabed, they also reset the life in the ocean.
Unlike much that man causes.

In Summer 80, not only does Duras observe her surroundings, but one of the children stands out. He sees and senses the unbearable uncertainty of existence. And with the help of fables, a young leader tells the child about the violent sides of life. The aging author, the child and the young summer camp leader give the reader different ways of relating to life. Duras’ way of offering a number of voices and viewing positions is also a central driving force behind the exhibition. The book has served as a way of thinking about the selection of artists and artworks. Anyone who has read the book will recognize people, events, weather phenomena and the way to use a visually strong artistic language. And those who have not read it will have no problem navigating the exhibition but may want to read the book afterwards.

The artists in the exhibition come from different generations, spanning five decades. They are mainly from Sweden, but also from countries in and outside Europe. The location of the exhibition at Mörby Gård, on Ornö in the Stockholm archipelago and the proximity to the Baltic Sea is not random. With it, I want to create a proximity to a larger geography, political events, then as now, and activate environmental issue. Just as Duras spoke of all this at the same time, but let it constitute parallel tracks in her book, there is on my part an insistence on shaping complex things in a complex way. Many voices, many expressions and many ways of looking at and shaping life. In the book of Duras the sentence - Their happiest days were the dark and vast days with rain - describes the children. It is chosen as the title of the exhibition because it binds together light and darkness. It describes works of art that don’t seek simple answers but resides with the one and the other.